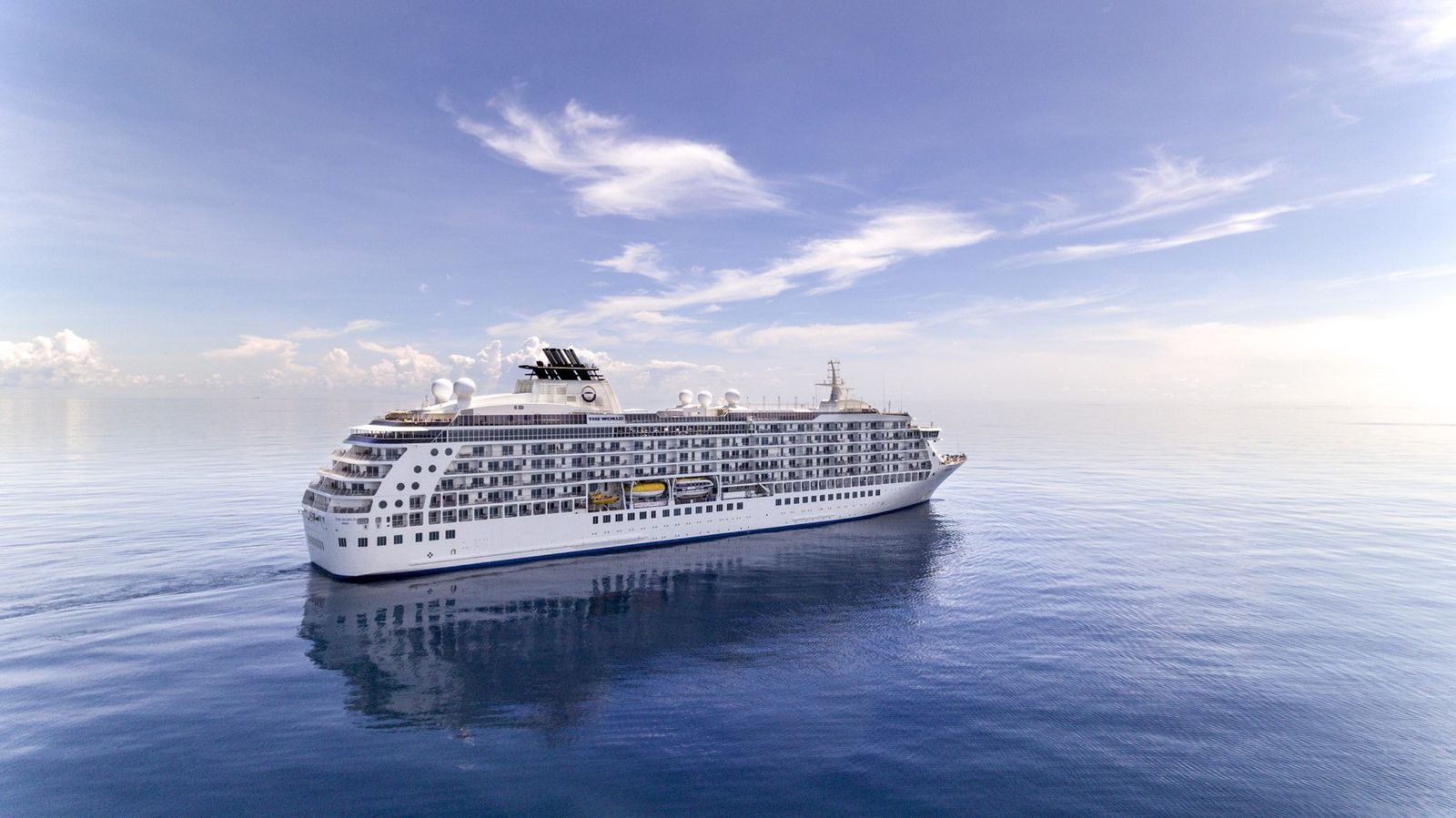 The home at sea

Imagine that your home is on a cruise ship. You live at home and travel the world at the same time. What can be more fun than this?

Seems like an unlikely scenario, but this kind of propriety exists. Meet The World, a ship that travels around the Globe for the owners of its cabins.

Let me explain. The World is a floating city of millionaires. It's the 21st century Titanic in terms of grandeur. The 200m vessel is the largest privately owned residential yacht. The residents are from 45 countries, and all live aboard as the ship travels. Some of them live on board full-time, while others visit periodically.

The World was the idea of Knut Kloster, a Norwegian with ties in the marine industry. The hull was built in Sweden with the superstructure completed in Norway. The ship was launched in 2002 and by 2006 all the residences were sold. She has 165 residences: 106 apartments, 19 studio apartments, and 40 studios.

The ship is operated by ROW Management Ltd, based in Fort Lauderdale, Florida, United States of America, but sails under the Bahamas flag.

Owned by its residents

When launched, the concept was a bit different. And it nearly went broke. The ship was then owned by a hotel company, and the sixth floor was initially reserved for hotel rooms. But it didn't work. In 2003, the business model was changed. No more tourists on board, only residents of a very high net worth. Until now MS The World remains the only residential cruise liner in existence.

All the residents are shareholders and vote on everything that happens with the ship: from the yearly route to the Christmas decorations.

So, what kind of people buy a propriety on a cruise vessel? Some very wealthy people, of course. The type of people that own private jets, collect art and have more than one residence.

Also, they value their privacy and confidentiality. The ship is a sanctuary, a refuge, and no paparazzi are allowed near it.

Nobody knows who lives on the ship.

142 unidentified families reside on the ship and everybody have undergone a strict vetting process before being allowed to buy. according to some sources, the average age is 64 years old.

Most residents spend about six months every year on board the ship. Christmas is a popular time to be on board with their families and friends.

Life in a sea of luxury

Life on the The World is impressive. Each apartment receives complementary cleaning service twice a day. Bathrooms are stocked with Bvlgari toiletries each day. There is internet wifi coverage even when at sea. There are doctors on board; even a pilates teacher is available.

But the question is: people with such financial ability aren't more comfortable on their own private superyacht?

The appeal of the The World lies in the adventurous itineraries.

In 2017, the World will sail approximately 44,000 nautical miles visiting more than 100 ports of call in over 20 countries. Residents will learn about different cultures, plus enjoy expeditions to two of the most remote regions on earth (Antarctica and Melanesia), all from the comfort of their own home on this one-of-a-kind ship. The 2017 journey begins in Sydney harbor, exploring the heart-shaped island of Tasmania and its unique treasures before an extensive visit up the coast of New Zealand through famed vineyards and lush hillsides. This spring the ship visits East Asia and discovers the unique traditions of Japan, Shanghai’s glamorous past and the dazzling neon lights of Hong Kong. After a Pacific crossing, summertime begins amid the beautiful blue water and tropical islands of Hawaii before saying aloha and venturing up the California coast to western Canada. The World then reverses course and heads south to explore the Sea of Cortez and Central America before transiting the infamous Panama Canal. Winter brings a voyage up and down the U.S. east coast, Bermuda’s pink sand beaches and a spectacular New Year’s celebration in the Miami, Florida.

Beside the classic itinerary, three times a year, the ship goes on expeditions into unusual destinations. The crew is joined by environmentalists and scientists who give an expert opinion about the destinations. It's like being back to school for a week, says one of the residents.

The World is a small floating town

The ship needs a crew of 280 people. The staff is international, with some 42 nationalities on board.

Construction of the vessel began in May 2000 in Rissa, Norway and in March 2002 the vision was realized when The World set sail from Oslo with its inaugural residents on board. Her maiden voyage departed from Lisbon, Portugal on 2 May 2002 and on 17 May 2002 she was christened in Venice, Italy. On 30 September 2003 the residents purchased the ship, and in June 2006, the original inventory of residences was sold out.

The World is the first ship of its size burning marine diesel oil rather than heavy bunker fuel, making for a much more environmentally friendly ship and allowing The World to call in areas where ships burning heavy fuel are banned.

Soon, The World won't be the sole ship of its kind. Another project, even larger, is in progress. The ship will be named Utopia and she is scheduled to set sail in 2021. The Utopia ship is 300m long and it's being built at the Samsung shipyards. With a tonnage of 108,000 GT, Utopia will be propelled by six Wartsila diesel engines for a top speed of 22 knots.

She will have 199 luxury residences and 218 hotel rooms. For operating the ship, she will need a crew of 600 people.