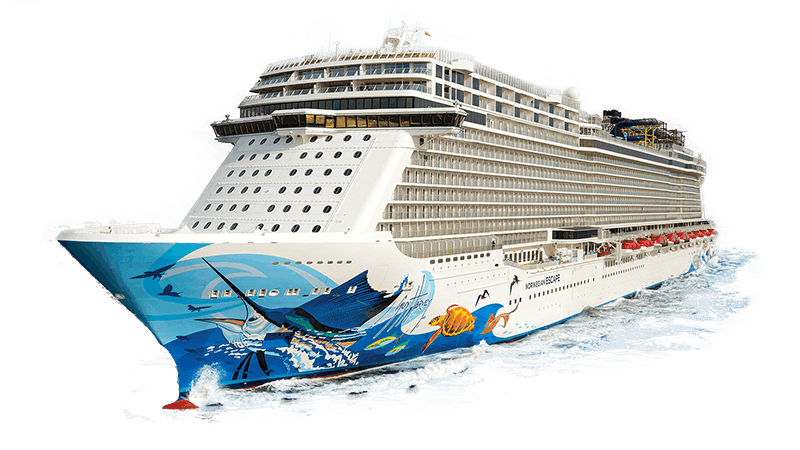 Spend a few days at sea

The cruise line business is booming. There are now more cruise ships than ever and they are bigger, more luxurious, and more entertaining. True floating hotels combined with shopping malls and entertainment centers. Plus a lot of food and drinks. So, what's not to like?

The destination is always important. No matter how much things one can do on board, ports of call are the main reason to embark on a cruise. To see new places, experience new things. So, we've browsed through a lot of offers to find some of the most interesting, exotic, and sometimes weird cruises available.

The cruising industry has started in the golden era of the transatlantic liners. The first ever cruise company is considered to be P&O (Peninsular & Oriental Steam Navigation Company) founded in 1822. In 1844, P&O started to offer passenger sea tour destinations to Gibraltar, Malta, and Athens.

Other sources say that the first cruise ship is the Prinzessin Victoria Luise. Built for the Hamburg America Line, she was launched on June 29, 1900, and served as a cruising passenger ship until December 16, 1906.

The first ship that offered world voyages was the RMS Laconia, a British ship built in 1921 and owned by Cunard.

We all can choose to cruise the classic routes of the Mediterranean Sea or the Caribbean Islands. But how about the truly remote places? The exotic? The icy and wild areas?

Celebrity Cruises, part of the Royal Caribbean Group can take you to one of the most remote areas of the Earth: the Galapagos Islands, famous for the huge tortoises and the almost untouched flora and fauna.

In fact, the visitor groups can go on land only in shifts of two to four hours to limit the ecological impact.

This is a new destination on the cruise liner's list. Royal Caribbean starts sailing to Cuba in April this year and this a first opportunity to see the beautiful island from a cruise ship. Cruises vary from four to seven nights, starting and ending in Tampa, Miami, Florida. Royal Caribbean will use the Empress of the Seas for this summer season's cruises to Cuba.

Celebrity Cruises offers also a trip to the wild Alaska. Departing from the port of Vancouver in Canada, this nine-night cruise will set you back around €1,000 per person but will take you as far as the Hubbard Glacier before returning to Seattle.

Again, Celebrity Cruises can take you all the way to the icy Antarctica. It's a 14-night cruise that starts in Buenos Aires, Argentina, makes a visit to Ushuaia and Cape Horn before making four stops in Antarctica: Schollart Channel, Paradise Bay, Gerlache Strait and Elephant Island. The cruise also stops in the Falkland Islands before returning to South America.

The cruise is operated by Celebrity Infinity ship and the prices average at 2,500 euro per person. Similar cruises are also available on the Holland America Line.

You always wanted to see Hawaii, but you're afraid to fly? No problem. There are cruises available at Celebrity Cruises that can take you to Hawaii. The port of departure is Vancouver, Canada. The trip can take 10 to 12 nights and it's operated with one of the Solstice class Celebrity cruise ships. Prices range from €900 to €1,700 per person.

Fancy a transatlantic voyage with stops in ports-of-call in Scandinavia and a few days spent in Iceland? Royal Caribbean has a 16-night cruise that starts in the port of Copenhagen in Denmark.

There you board the Vision of the Seas, one of the impressive vessels in the Royal Caribbean fleet. After a few stops in Norway to see the fjords and a quick drop in Scotland, the ship starts the crossing of the Atlantic.

Iceland is the next stop, where you'll be spending four days, enough to experience all the sights of the remote island. After three more days at sea, the ship reaches North America, making a stop in Newfoundland, Canada, before the final point of the voyage: Cape Liberty, New Jersey, USA.

– The North Pole on a Russian Atomic Icebreaker

Yes, it is possible to reach the North Pole on a cruise ship these days. Actually, it's not a real cruise ship, but an atomic Russian Ice Breaker. Talking about an exotic cruise.

It's one of the most expensive trips with prices starting at around $28,000 for a 14-day trip from Murmansk, Russia to the North Pole. The charter flight from Helsinki, Finland, is not included.

Yes, there's a company that operates three cruise ships that use sails. Windstar is the name and although the ships are smaller that the usual behemoths, they are still impressive. Even the marketing texts of the company say: "This feels like your own private yacht. You know it the moment you step on board."

The three ships are named Wind Surf, Wind Spirit, and Wind Star. The five-mast Wind Surf can accommodate 310 guests in 154 staterooms, while the other two ships can sail with 148 guests in 74 staterooms. All the notable destinations are available including Alaska and ocean crossings.

This is the mother of all cruises. Seven continents, seven cruise ships. This cruise will take you from South America to Asia via Europe, North America, Africa and Antarctica. A variety of ships is used, from the 264-guest Le Soleal to the 1,258-guest Maasdam. Also, there's time between each cruise to unpack, do the laundry and pack again before setting off on the next adventure.

Prices for this 357-day 'World of Travel' itinerary start from £125,000 per person including business class flights, overseas transfers and all seven cruises.

Round the World in 120 days

This is the realm of the legendary Cunard Lines. They specialize in cruises that even spawn to 120 days, enough time for the ship to circumnavigate the world.

If you want to see the world in three months or so, you can board one of the three ships that Cunard Lines operates. All of them have names that remind us of the glory days of transatlantic liners. Queen Mary 2, Queen Elizabeth and Queen Victoria.

The Cunard cruises start in the British port of Southampton, but you can board the liner also in San Francisco or Fort Lauderdale, USA.

The circumnavigation takes 120 days, starts in January and lasts until May. This year's edition is sold out, despite the £13,799 starting prince per person. Other world voyages with the Cunard Lines take from 89 to 132 days.