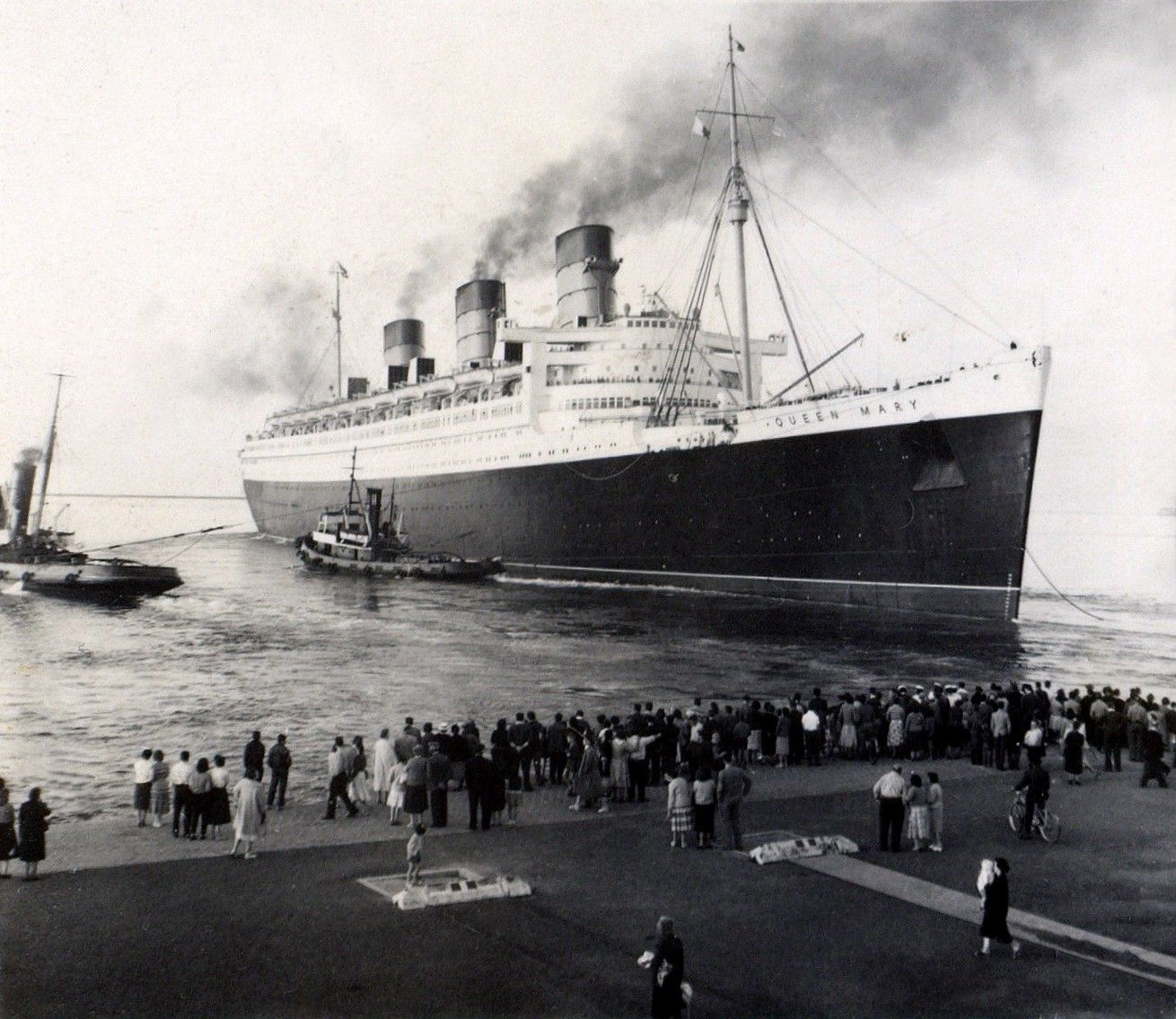 The pride of the British Fleet of ocean liners

RMS Queen Mary was the flagship for the Cunard Line and one of most impressive ocean liners that ever existed.

She sailed the Atlantic Ocean from 1936 to 1967 and conquered the Blue Riband Trophy twice for the fastest crossing of the Atlantic. Standing at 310m long and 55m in height, RMS Queen Mary was a sight to behold. 2.139 passenger could travel in style, but she also needed a crew of 1.101 people.

She had a troubled start and a difficult birth. Designed in the 1920's as a replacement for the Mauretania. Keel was laid in January 1931 at the John Brown shipyard in Clydebank, Scotland. The launch was scheduled for 1932.

On 26 September she was launched as RMS Queen Mary. The ship was named after Queen Mary, consort of King George V. Until her launch the name was kept secret. The story says that Cunard intended to name the ship Victoria, in keeping the tradition of giving its ships names ending in "ia". But, the company men asked the king's permission to name the ocean liner after Britain's greatest queen, the king replied that his wife, Queen Mary, would be delighted.

This story was officially denied at that time, but some truth exists.

With magnificent art-deco interiors, RMS Queen Mary was an impressive ship. She set sail on the maiden voyage on 27 May 1936 from Southampton to New York. She was going to break the speed record, but thick fog was encountered on the last day of the crossing, making the record attempt impossible.

RMS Queen Mary used 24 Yarrow boilers in four boiler rooms and four Parsons turbines. The power provided by the steam turbines was around 158,000 kW. Four propellers turning at 200 rpm pushed her at 32.84 knots during acceptance trials.

A few months later, in August 1936 she did manage to break the speed record for the fastest Atlantic crossing. After four days and 27 seven minutes, she reached New York, averaging 30 knots. Queen Mary took the title of the fastest liner for the first time from the French ship SS Normandie.

The French liner retaliated a year later when she recaptured the Blue Riband, only to lose it again to Queen Mary in August 1938. Queen Mary was the fastest ocean liner till 1952 when she lost the title to the SS United States.

RMS Queen Mary made her last peacetime voyage in August 1939 and she was berthed in New York harbor. She was later joined by other ocean liners like Normandie, Mauretania and Queen Elizabeth.

In 1940, Queen Mary entered military service. She sailed to Australia to be converted into a troop carrier. After conversion, the ship's hull, superstructure, and funnels were painted navy gray. The great ship was nicknamed the "Grey Ghost" as a result of the color. The lavish interiors were removed and replaced with wooden bunks. She could carry as many as 15.000 troops in a single voyage.

On 2 October 1942, Queen Mary was involved in an incident, when accidentally sank one of her escort ships. Cruising in zig-zag to avoid the enemy bombers, she sliced through the light cruiser HMS Curacoa. The cruiser was destroyed and 239 lives were lost. Due to the risk of U-boat attacks, Queen Mary was under orders not to stop under any circumstances, and she steamed away with some damages to her hull.

Queen Mary was returned to Cunard on September 1946. She was refurbished and returned to passenger service a year later. After a few good years, the numbers of passengers started to decline due to the aviation taking over the business of crossing the Atlantic. In the '60s, Queen Mary was used for cruising, but she was not well suited for pleasure cruising.

Her fate was sealed in 1967. Sold to Long Beach, California, she made her last voyage in September 1967. She is docked permanently in Long Beach and today is a floating hotel, conference center, and museum. She is moored closely to the Carnival Cruise Line terminal.